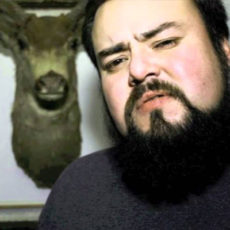 2Mex is infamous for keeping his fanbase satiated with an almost constant flood of releases, both as a solo artist and with his acclaimed group projects (including the seminal indie rap collective Visonaries and Look Daggers, his collaboration with Ikey Owens of The Mars Volta). My Fanbase Will Destroy You, however, took two years to create, and that extended period yielded a record that represents his multi-faceted skills in the most comprehensive and precise manner yet.

A break of this length was an astounding accomplishment for a man who is possibly the most prolific underground rapper ever, with over 35 CD releases in his catalog and too many guest appearances to count. The newly-discovered sense of focus for one project came about in part due to a discussion with Strange Famous Records label boss Sage Francis (a prolific underground legend in his own right), who signed 2Mex in 2008:
“One caveat of the deal was established from the start: this has to be the quintessential 2Mex album,” says Francis. “The best of the best. It will be the next level record. The ceiling breaker. It will be the only 2Mex album that is released in the year that it comes out.”

And so began the journey that led to classic-quality tracks such as the first single “Dead Hand Control,” the anthemic return-to-form pledge of allegiance “Back”, and the introspective “I Just Didn’t Know” (featuring Returners bandmate Stacey Dee). Organized Konfusion’s Prince Po shows up on “What You Know About,” a dedication to the under-the-radar greats that influenced a generation of hip hop. The strain of maintaining fulfilling, lasting relationships in the 21st century comes under scrutiny as 2Mex trades verses with Living Legends homie Murs on “Rollercoaster.” The subsonic bass crunch of “Press Your Luck” brings the new sound of underground Los Angeles to the indie rap masses.

As for the title of the record, 2Mex explains that it is exactly what it seems, a direct dedication to his supporters for the strength and love they have shown him throughout his career: “There’s a small contingency of hardcore fans that have kept me alive, kept my rent paid,” he says. “This record was made for them, for those who have believed, the people that have rolled with me forever, the ones with ‘2Mex’ tattooed on their body. I truly believe in them as much as they believe in me, and this album is for them.”